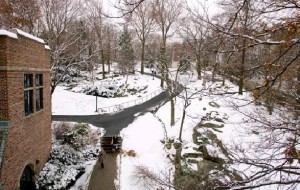 Sarah Lawrence College is the most expensive college in the nation this year (photo credit: Jim Lowtide).

“Campus Grotto” has released its annual list of the most expensive colleges. So which university tops the list? That distinction belongs to…Sarah Lawrence College in Yonkers, New York. With a total cost of $61,236 (total tuition includes tuition, fees, as well as room and board), the alma mater of journalist Barbara Walters and Chicago Mayor Rahm Emanuel is rather pricey! Placing second is also a university located within the state of New York — New York University, with a total annual cost of $59,837. Third place? Harvey Mudd College, with a total cost of $58,913.

Do you find it interesting that the many expensive colleges are either located in major urban centers or totally off the beaten path? Why do you think that is? Does it surprise you that Columbia and Dartmouth are the most expensive Ivy League colleges? Let us know your thoughts on the tuition costs at these universities by posting below! And let us know what universities you predict to break into the top ten of most expensive universities next year.