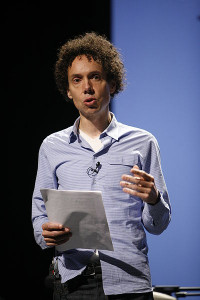 Bestselling author Malcolm Gladwell (author of “Blink,” “The Tipping Point,” “Outliers,” “What The Dog Saw,” and a host of articles in “The New Yorker”) has some very interesting things to say about college rankings. We at Ivy Coach don’t happen to agree with a lot of the things that he says, but the author is certainly entitled to his opinion. We’ll be providing you with a full analysis of his piece on college rankings in “The New Yorker” in the coming weeks but we want to first show you a video of Gladwell discussing those very rankings. Check it out at the 34:45 mark (you can fast forward up until that point): Malcolm Gladwell on The College Rankings.

Gladwell raises some interesting points in his discussion — points that we don’t necessarily agree with. He questions who anointed the “US News & World Report” writers/rankers as the gatekeepers to America’s universities. He questions why they choose to weigh certain variables such as endowment as they do and argues that if he were anointed gatekeeper to the colleges, he’d rank colleges in a very different way. In his way, Penn State University would be near the top of the list. Gladwell also argues that universities are considered prestigious if they conduct great research but he cites studies that suggest research is either uncorrelated with a strong undergraduate education or inversely correlated!

We’ll be diving into Malcolm Gladwell’s thoughts on the rankings soon but we hope the video intrigues you at the very least. While we always appreciate Malcolm Gladwell’s arguments, we find many happen to be without merit. Every ranking system ever created is based on an algorithm – however simplistic – and weights that are given to variables in that algorithm are always going to be on some level subjective. But these inputs can in turn lead to an objective ranking. And nobody does this better than “US News & World Report.”

Check out our newsletter: The Campus Visit, Rankings, and Fantasy Sports.