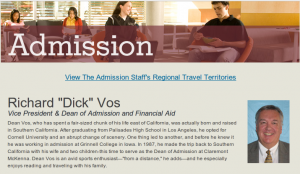 Dick Vos, the former Vice President and Dean of Admissions & Financial Aid at Claremont McKenna has resigned. There is a college admissions scandal brewing at the university.

Claremont McKenna Admissions is under fire from the press and academia. In 2007, the MIT Dean of Admission resigned for lying on her resume. Specifically, the dean misrepresented her degrees which was rather ironic because she previously spoke out nationally about how, for instance, high school students shouldn’t overstate their roles in high school activities. Prior to the scandal, we very much supported the longtime MIT Dean of Admission for speaking out against the status quo in college admissions. The MIT Admissions Office now has some company on Page 6. But that was then. Now it’s time for Claremont McKenna to dominate Page 6 with a college admissions scandal of their own. If you haven’t already heard, the Claremont McKenna Office of Admission is in quite a bit of hot water!

According to “The LA Times,” Claremont McKenna’s Vice President and Dean of Admissions & Financial Aid has resigned when news came out that the school had inflated the SAT scores of applicants in the hope of rising in the annual “US News & World Report” college rankings. Even bigger…they’ve been doing this since 2005 — specifically, 10 to 20 points each year! If you didn’t suspect the “US News & World Report” college rankings were important before, hopefully you do now that you can see what Deans of Admission will do to push their school ahead of the competition.

While Claremont McKenna has not announced this formally, Richard “Dick” Vos, the former Vice President and Dean of Admissions & Financial Aid is no longer listed on the website of the Claremont McKenna admissions office (the school has done a fairly good job of deleting him from every CMC search engine result possible!). He is also no longer employed by the college. It doesn’t take rocket science to conclude that Dick Vos is thus the person responsible for inflating SAT test results of applicants in the hope of boosting Claremont McKenna’s “US News & World Report” rankings.

This college admissions scandal, which was prominently featured last night on “The New York Times” website, is still developing. Check back to our blog for updates.