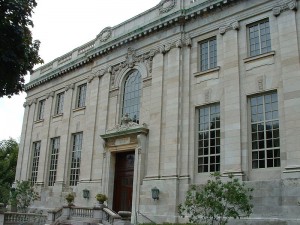 Brown, Dartmouth, and Princeton top the sexiness charts, according to “BuzzFeed.” And, no, this building isn’t very sexy. But it is a building at Brown!

Of all of the factors included in the “US News & World Report” college rankings, sexiness isn’t one of them. But thank heavens for “BuzzFeed” because they’ve got a ranking of the sexiest smart colleges. According to “BuzzFeed,” “Sexiness has been tragically ignored by most college ranking systems (we’re looking at you, US News & World Report), but no longer. BuzzFeed plotted Forbes’s academic rankings of colleges and universities against dating site DateMySchool’s hotness index, which measures the attractiveness of students by how much interest their dating profiles get. Schools in the top right of the graph above scored high in both. Then BuzzFeed weighted both ranks equally and tallied them up to determine our top ten.” Wow. Kind of ridiculous, right?

Did you know that students were so attractive at Dartmouth and Brown? Let us know your thoughts on this very important matter by posting below! And read about another college ranking formula if it interests you here.