“The time has come, the time is now. Marvin K. Mooney, will you please go now?” No, we’re not quoting Dr. Seuss, a former Dartmouth student, because it was recently announced that the celebrate author will posthumously publish a book, one unearthed from a book found in a box. A book in a box. Very Dr. Seuss. We’re quoting Dr. Seuss because now is the time — not later — for rising high school seniors to be completing all of their many college applications. That time is not September. That time is not in the final days of October before the Early Decision and Early Action deadlines. That time is now, Marvin K. Mooney. Now. 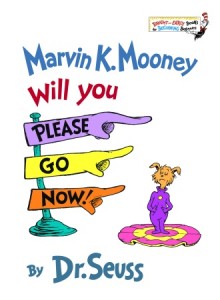 Rising high school seniors, the time to work on your applications has come. The time is now.

If you’re planning on applying through an Early Decision or Early Action policy (as you should), then you also need to be working on your Regular Decision applications now. And why’s that? Because you won’t hear back from your Early school until mid December and Regular Decision applications are due at the top of January. You simply won’t have ample time to uniquely tailor all of your essays to each school to which you’re applying. And if you’re not planning on writing exceptional, unique essays for each school and you’re planning on just sending the same cut and pasted versions of essays to all schools, well then you might want to reconsider. And by might want to reconsider, what we really mean is oy vey…definitely don’t do that. Yikes.

If you’re planning on procrastinating until the Regular Decision deadline (and not applying Early Decision or Early Action), then you’re making another big mistake, Marvin K. Mooney. We have no idea why we keep bringing Marvin back into this. Writing about college admissions every day can get tiresome. Marvin helps us spice things up. To not apply Early Decision or Early Actin is to waste one of the few cards that applicants have in their back pockets. At many highly selective colleges, the odds of getting into a school in the Early round can be quadruple — yes quadruple — the odds of getting in during the Regular Decision round. You only get one shot at applying in the Early Round (except at a couple of schools like NYU and Emory where they have two Early Decision rounds). Don’t waste it. And stop procrastinating. The time to be working on your applications is now and not at the eleventh hour.

And if you’d like Ivy Coach’s assistance with the applications and everything that goes into improving your odds of admission, contact us now rather than at the eleventh hour. Ok, Marvin?