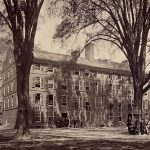 The Yale football team is in a bit of hot water. At this past Saturday’s Yale vs. Dartmouth football game, Yale distributed a program that featured a historical retrospective of Yale-Dartmouth football programs from games of decades past. It seems innocuous on the surface but if one takes a closer look at the previous …

The Yale QB who pulled his name out of contention for the Rhodes Scholarship is at the center of a scandal.

The Yale football coach resigned because he lied about having applied for a Rhodes Scholarship.