July 25, 2012 One of the major college essay mistakes students too often make is writing about how beautiful a campus is. We know — this sounds silly. Why is this one of the biggest mistakes a student can make in their college essays? It’s a complement, right? The fact is — sure, … 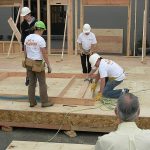 There are so many college essay writing mistakes that one can make. We’d like to showcase a couple for you to see if you’d even catch them. In the sample excerpt below, there are a few key mistakes that a college applicant makes. Can you spot the errors that can …

September 16, 2011 College admissions counselors want students who play well with others. It’s a college essay mistake to imply that you don’t.

August 28, 2011 Students should avoid the trite theme of working hard to win a race in college essays. It’s a mistake. Instead, be creative.

April 28, 2011 Continuing our series on college admission essays, let’s take a look at another common mistake many high school students make in their personal statement for the Common Application. In this particular college admission essay, the topic happens to be sports. Here’s the paragraph: “Soccer has been my passion ever since …

April 24, 2011 Continuing our series on common mistakes college applicants often make on their college application essays, let’s take a look at a sample paragraph we’ve written below that is emblematic of a type of essay college admissions counselors often receive. After the sample paragraph, we’ll analyze the writing and give you …