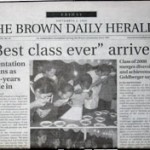 Ivy Coach is featured extensively on the pages of “The Brown Daily Herald” today, the newspaper of Brown University. In a piece by Alex Skidmore entitled “Jump in early admission lowers total acceptance rate,” the slug-line (is that what you call it?) reads: “Ivy Coach expert says higher early admission …

January 27, 2015 Jose Canseco juiced. As did Roger Clemens and Barry Bonds. And they all got caught. But these guys and Lance Armstrong aren’t the only juicers. Highly selective colleges are juicers too. That’s right. They’re juicers. We’ve been saying it for years, but we’ll say it again right now. There’s an article …

August 3, 2013 A “Fox Business” article by Emily Driscoll entitled “How To Make a College Application Stand Out” discusses how students are applying to more colleges than ever before. College application figures on the rise. Shocker! It’s not as though we’ve been writing about this topic for years or anything. Many folks …

January 23, 2012 Ivy Coach salutes MIT Dean of Admission Stuart Schmill for setting a standard in college admissions which all Deans of Admission should follow.