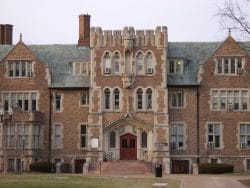 Wondering which colleges accept self-reported test scores? Washington University in St. Louis has joined a growing list of schools across the United States that allow students to self-report their testing results, including for the SAT, ACT, and SAT Subject Tests. Wash U announced the move just last week. The school joins a list of universities that includes Stanford University, Williams College, Colby College, University of Chicago, Georgia Institute of Technology, and Colorado College. Colby and UChicago joined this last last year. And, yes, we’ve cherrypicked the most selective schools from the list of over 20. Deal with it.

A piece by Scott Jaschik for “Inside Higher Ed” entitled “More Colleges Let Applicants Self-Report Test Scores” describes why universities are choosing to allow students to self-report. To put it simply, these schools, nobly, want to eliminate barriers to apply — notably for low-income students. As Jaschik writes in his piece, “Both the College Board and the ACT grant fee waivers, and those waivers include the right to send a limited number of score reports to colleges. The College Board, for example, lets those who receive waivers send four reports shortly after taking the SAT and another four any time during high school. This means that someone who receives a fee waiver and ends up deciding to enroll at one of the colleges with self-reporting would have the single required official report covered by the waiver. The basic fee for the SAT is $46, or $60 for the SAT with the essay. The ACT fees are similar, $46 for the basic test and $62.50 for the test with the writing portion added.”

We think it’s great that these schools are allowing students to self-report their scores. This way, low-income students applying to these schools won’t have to order score reports as they do for most other schools and will only have to do so once admitted if they wish to enroll. That saves both money and hassle. But let’s clear up a misconception. The Testing section of the Common Application, which contains a student’s self-reported scores, should always be completed — irrespective of whether a school allows students to self-report scores or not. It can’t be left blank.

Of course, for schools on this growing list of self-reporting schools that now includes Wash U, they don’t require an applicant to submit his or her scores until after admissions decisions have rolled out and the student has expressed an intention to matriculate. The schools do so then in order to confirm the veracity of the results. But for families who don’t happen to struggle with paying the fees for these score reports, for families that are not low-income families, we encourage you to send in the reports with applications — whether the school is test-optional or not. Don’t give an admissions officer any reason to doubt the scores.

And for those dishonest students thinking of lying about your test scores to these schools, think again. Your admission will be revoked by these schools if your score reports, which they receive before you enroll, don’t match up with what you reported on your application. We know. We’re stating the obvious. But, regrettably, it’s not so obvious to all!