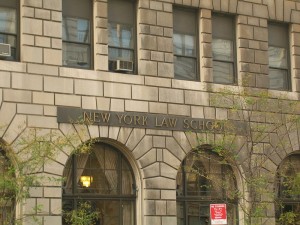 More students are applying to law school than ever before. Tuition is rising faster than college tuition. And yet grads are having difficulty on the job market (photo credit: Mark Frank and Chloe Carli).

If you think the cost of tuition for college which is soaring at a rate higher than inflation is too high, students applying to law school face even higher tuition costs. In an economy in which there are few jobs for lawyers upon their graduation, you’d think the demand to go to law school would weaken. But law school seems impervious to the rules of supply and demand.

According to the “New York Times,” “Legal diplomas have such allure that law schools have been able to jack up tuition four times faster than the soaring cost of college. And many law schools have added students to their incoming classes — a step that, for them, means almost pure profits — even during the worst recession in the legal profession’s history. In short, law schools have the power to raise prices and expand in ways that would make any company drool. And when a business has that power, it is apparently difficult to resist.”

The “New York Times” focuses on New York Law School as a case study of law schools that continue to exponentially increase tuition in spite of its graduates not finding work upon graduation. At $47,800 a year at New York Law School, the tuition is higher than at Harvard Law School and N.Y.L.S. has been increasing the size of incoming classes by as much as 30% in the last couple of years. Did we mention that New York Law School is ranked in the bottom third of the annual “US News & World Report” rankings?

With less than half of graduates receiving offers of employment after graduation, one may wonder how this business – this law school business – can sustain itself. And if you only look at the salary of graduates in the private sector as reported by New York Law School to “US News & World Report,” you’d be fooled by the the $160,000 average income (an income also reported by Harvard and Yale Law Schools). In fact, the dean of New York Law School clarifies that most grads of N.Y.L.S. end up getting work at “small to medium firms at salaries between $35,000 and $75,000.”