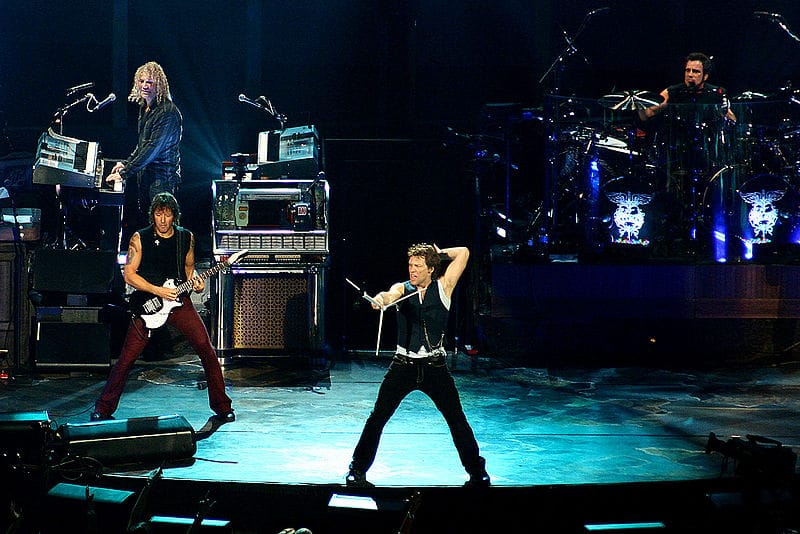 Oh wait, we’re supposed to be writing about colleges and college admissions, not writing out Bon Jovi lyrics. But it’s commencement season and the sun has come out alas! So give us some slack. Fairleigh Dickinson University had one heck of a commencement ceremony today. In the stadium that is home to both the New York Jets and the New York Giants, Jon Bon Jovi surprised many graduates, parents, and “old people who just come to these things” (to quote Conan O’Brien’s awesome commencement address of some years ago) by performing with his band.

As Wayne Parry reports on the Fairleigh Dickinson commencement for “Fox News,” “Fairleigh Dickinson won a nationwide contest to bring the New Jersey-based rock band to play their graduation by generating the most interest on social media…Jon Bon Jovi, who was born and raised in Sayreville, New Jersey, spoke to the graduates before the band performed ‘Reunion,’ a song about a class gathering years later to share memories of their lives. ‘Today marks the end of one chapter in your life and the start of another,’ he said from a stage at MetLife Stadium in East Rutherford, where the band has played to sold-out crowds many times. ‘Enjoy the book; you’re the one writing it. Don’t take anything personally. Accept both praise and criticism equally, but take neither to heart. There are many surprises awaiting you on the journey.’ The contest was run by MTVU, and asked students across the country to tweet their best college moments.”

We’re excited in the coming days to see what kind of other surprises are in store at commencement ceremonies across the nation. And we’re excited to see who will give the most memorable addresses — and which colleges will be lucky enough to host these great speeches (or, in the case of Fairleigh Dickinson — concerts!).