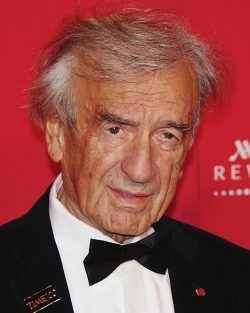 Ivy Coach mourns the death of Elie Wiesel today, a long-time Boston University professor and one of the world’s great humanitarians.

We are very sad today to learn of the death of Elie Wiesel, arguably the most famous survivor of the Holocaust, a man who gave voice to the voiceless and whose original prose is forever seared into the world’s collective conscience. At a time when very few people spoke of the horrors of the Nazis, Elie Wiesel, through his pen, served as a voice crying out in the so-called wilderness and he devoted decades of his life to championing issues of human rights around the globe. Elie Wiesel, a celebrated author, a Nobel Peace Prize laureate, a champion of humanity, taught us all, “The opposite of love is not hate, it’s indifference.”

We at Ivy Coach have some personal ties to the long-time Boston University professor too. He was Brian’s commencement speaker at Dartmouth, we believe the first Jewish graduation speaker in the university’s history. He was a cousin of Bev’s Israeli-born son-in-law who still very fondly remembers a meal the family once all shared together in New York. When we first learned of Elie Wiesel’s death today, our first instinct was to go to Boston University’s homepage, to see how the university at which he taught would honor one of the humanity’s most outstanding citizens (the school has the renowned Elie Wiesel Center for Jewish Studies). And honor him they did. He also served as a visiting professor at Barnard and has ties to several other schools too…but Boston University was his teaching home.

Boston University, and the world, lost one of humanity’s greatest citizens today. But we’re also reminded how blessed we all are that Elie Wiesel lived to tell his story, to make our world better and more righteous. Thank you Elie Wiesel for your humanity.