SAT Scores of the Famous 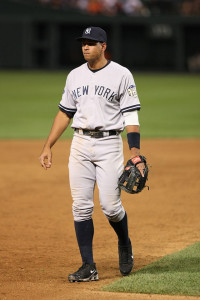 A-Rod scored a 910 on his SAT. Nope, that was not his area code. It was his SAT score. His total score (photo credit: Keith Allison).

Curious to know which celebrities scored high on their SAT? Wonder no more. We know it’s been keeping you up at night. On the 1600 scale, Bill Gates scored a 1590. Pretty close to perfect! And how about Paul Allen, also of Microsoft? A 1600. Take that Bill Gates. Bill O’Reilly scored a 1585. No, you can’t score a number that ends in 5 anymore, but you could then! And how about Ben Stein from “Ferris Bueller”? Did you know that Ferris Bueller’s day off was exactly 29 years ago today? It was. Anyhow, Ben Stein scored a 1573. Bueller?

Allegedly, Natalie Portman scored somewhere in the 1400’s, while there have been rumors that have circulated that Will Smith scored perfectly. But he only admits to his score having been “high.” In West Philadelphia born and raised! Stephen King and Meredith Vieira both scored somewhere in the 1300’s, while former President George W. Bush scored a 1206. In the 2004 election, though, President Bush actually had a higher SAT score than his opponent, current Secretary of State John Kerry. Kerry scored an 1190.

And how about Kobe Bryant who bypassed college to go directly from high school to the Los Angeles Lakers by way of the Charlotte Hornets? He scored a 1080. Dr. Bill Cosby didn’t do so well on the test either. He scored a 500 (with 400 being the lowest score possible). But Dr. Cosby earned a track scholarship to Temple and the rest was history. It goes to show you that you can become successful in this world in spite of low SAT scores. But, if we’ve learned anything from Malcolm Gladwell, maybe folks like Bill Cosby became successful not in spite of their SAT scores — but rather because of them.

Have any other SAT scores of the famous to share? Let us know by posting a Comment below! Alright, we’ll throw in a few more celebrity SAT scores: Ben Affleck allegedly scored an almost perfect score. Al Gore? 1355. Take that Internet. Steve Wozniak of Apple? A perfect score on the math section. That’s really shocking (not!). Jesse Eisenberg? 1260. We suspect the man he portrayed in “The Social Network” scored higher. A-Rod? 910. Yikes! And how about James Franco? “Near perfect.” We’ll believe that one when we see it. Or maybe he imagined a future in which he watched the subsequent movie “How High” and took great inspiration?