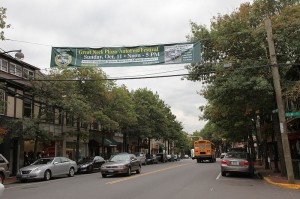 Did you hear the story about the imposter on the SAT? The New York Post is reporting that an SAT scandal is brewing in Great Neck, New York, which happens to be the setting of F. Scott Fitzgerald’s The Great Gatsby. You know…the book that just about every high school student lists as their favorite when applying to college (don’t ever do that!). In any case, a few students allegedly hired a student at a top midwestern university to take the SAT in their stead. And while the principal and superintendent declined to comment on the matter, one school board member was quoted as saying: “Cheating on your SAT sort of undermines the entire process of high school and college admission,….It’s serious.” But wait…did he really say sort of? Sort of? Oy vey! It totally undermines the entire college admissions process!

In the Great Neck North High School case, several students are currently being investigated, including two brothers. One of the brothers is currently in college but if indeed he cheated on the SAT, there is a strong possibility that he could end up being expelled from his current university. Applicants who cheat or lie on their college applications risk not only getting rejected but if they’re accepted and have subsequently matriculated, they risk expulsion. If they’ve received their degree, these degrees can also be rescinded. That’s four years of hard work and tuition dollars lost, not to mention having to explain all this on a job interview.

And what can The College Board, the maker of the SAT, do to prevent future instances of people posing as test-takers to take the tests in their stead? Well, biometric indicators aren’t currently used to verify one’s identity when taking the SAT, but they are used to identify test-takers for graduate-level entrance examinations such as the GMAT and MCAT. So, in our view, it seems to be only a matter of time until biometrics will be used for the SAT as well so this sort of scandal never happens again.

While you’re here, read what we’ve got to say about plagiarizing college essays. And while we still have you, don’t cheat on your SAT and don’t plagiarize your college essays. It will come back to haunt you for many years to come.