Problems with the New SAT 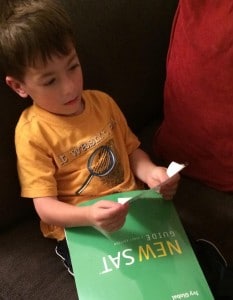 Keep studying for that new SAT, buddy! It’s never too soon. We’re kidding. There’s a such thing as too soon.

There are problems with the new SAT. And while problems with any test revamp are to be expected (and we’ve reported on these problems with the newly designed test in the past), a special report by Renee Dudley for “Reuters” entitled “New SAT was designed in way that may hurt neediest students” paints a picture of a newly designed SAT that discriminates against non-native English speakers, American immigrants, students with dyslexia and undiagnosed learning disabilities, and international students. So, basically, the new SAT is Donald Trump. We kid, we kid. It’s not funny. The man could be the next President of the United States, though we sure hope not. We’re with her!

So how does the newly designed SAT discriminate against these groups? Well, the new math section is extremely text heavy. Apparently College Board realized in the course of their own research that about half of folks given a prototype exam weren’t able to finish the math section. This led some folks to surmise it was because, in the interest of making the section more practical and less, well, algebraic, the section became text heavy.

As Dudley reports for “Reuters,” “The redesigned SAT is described in the College Board’s own test specifications as an ‘appropriate and fair assessment’ to promote ‘equity and opportunity.’ But some education and testing specialists say the text-heavy new math sections may be creating greater challenges for kids who perform well in math but poorly in reading, reinforcing race and income disparities.”

Do our readers think a text heavy math section is unfair to certain groups who may struggle not with math but with the English language? We’re curious to hear from you so do post a Comment below and we’ll be sure to jump in on the conversation.