Issues with the SAT 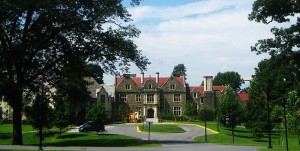 Robert Sternberg has issues with the SAT. And so do many others. Bard College recently announced a decision to completely shake up their admission metrics (photo credit: Ben Ramirez).

Do you have issues with the SAT? If so, you might want to read this. There’s a piece in “Bloomberg BusinessWeek” entitled “What’s Holding American Students Back? The SAT” by Peter Coy that we wanted to draw to the attention of our readers. In the piece, the current president of the University of Washington, psychologist Robert Sternberg, is cited as an example of a one-time American student who would not have succeeded had it not been for one teacher who recognized his aptitude. When he was in elementary school, Sternberg did poorly on IQ tests and other teachers — on account of this testing — expected him not to be at the top of the class. But the conviction of one teacher changed his course in life.

Sternberg argues that the SAT and the ACT are modern examples of that IQ test he flunked at in elementary school. He thinks that these two exams are, in essence, “IQ tests in disguise.” According to the piece in “Bloomberg BusinessWeek,” “Sternberg says he thinks college applicants should also be asked to demonstrate their creativity, practical intelligence, and even wisdom, qualities which are in shorter supply than cleverness. ‘If you look at why this country is so screwed up,’ he says, ‘it’s not because the people running it have low SATs.'” Fair point.

So what’s the solution? Well, 850 four-year colleges are now SAT or ACT optional. Is that the trend the country will follow in the future? Do you think an alternative to the SAT or ACT can be created? Let us know your thoughts on issues with the SAT and ACT and proposed solutions. We look forward to hearing from you.