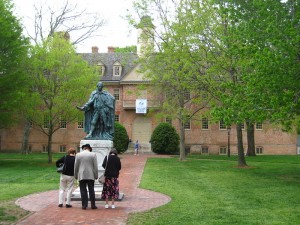 The College of William and Mary is among the most haunted universities in the United States, according to “Noodle.” Do you think Thomas Jefferson still walks the grounds?

“Noodle” has published a list of eight haunted college campuses. Are you curious if your university is among the haunted? Wonder no longer — let’s get started. Cal State University – Channel Islands is haunted. Why? Because the university is on the grounds of a former insane asylum. Yes, you read that right. An insane asylum. In the ten years that the university has been open, some students have claimed to have encountered some former inmates. Scary, huh?

Penn State University is also haunted. A woman was killed in one of the library stacks in 1969 and the rumor has it that she still haunts those very stacks. How “666 Park Avenue” of her! The University of Georgia is also haunted, according to “Noodle” — by Confederate soldiers and folks who have been killed and/or committed suicide. Boston University is also among the haunted. Its Shelton Hall is allegedly still the stomping grounds of the deceased Eugene O’Neil, a playwright who died in the building which was then a hotel.

Ohio University makes the list as well. Apparently, a whole basketball team haunts Wilson Hall. Bizarre, huh? Students have heard lots of voices in Wilson Hall and Room 428 was permanently sealed due to strange voices. Permanently sealed — oh my! Flagler College too is haunted, with ghosts from the time when the college was a report still lingering. And The College of William and Mary is among the haunted universities as well. Native American drumbeats can be heard in the Brafferton building. Spooky!

What other universities are haunted? Share your stories with us! We’re anxious to hear them.