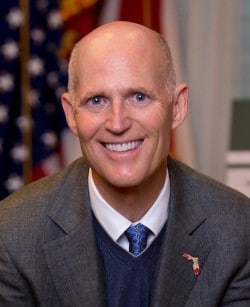 Florida Governor Rick Scott has appealed to Yale University to move to Florida.

Florida Governor Rick Scott has made an interesting, although certainly hopeless push to move historic Yale University to the Sunshine State. Of course, Governor Rick Scott doesn’t actually believe he will sway Yale to move its campus — where it’s been for about 300 years! — to sunny Florida. But he’s making a point that Florida is better for businesses like Yale. Oh, and Yale, like every highly selective college, is a business.

Florida Governor Rick Scott doesn’t actually believe he can get Yale to up and move to Florida. But his point was successfully made.

As reported by Abby Jackson of “Business Insider” in a piece on Florida’s push for Yale, “Scott’s proposal comes after news that Connecticut lawmakers have been trying to dip into Yale University’s $25.6 billion endowment, and that the mayor of New Haven, Connecticut is backing a proposal that could make it easier to tax Yale’s commercial real estate. ‘With news that the Connecticut Legislature wants to unfairly tax one of the nation’s most renowned universities to deal with the state’s budget shortfall, it is clear that all businesses in Connecticut, including Yale, should look to move to Florida,’ Scott said, according to the Connecticut Post.”

And while Dartmouth alumnus Jeffrey Immelt, CEO of General Electric, may be moving his company’s headquarters from Connecticut to Boston (a huge blow for Connecticut), Yale isn’t going anywhere as one of its spokesman so confirmed. But Governor Scott did get publicity with this push. So it seems his objective was achieved if folks didn’t already know that Florida is a tax-friendly place to live. If you can live with dinner starting at 4:45 PM. Oh snap.