Veterans in the Ivy League 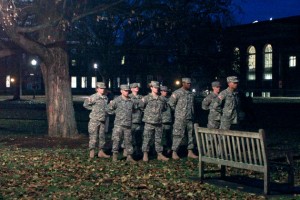 More veterans need to be admitted into the eight Ivy League colleges. Step up your efforts, Ancient Eight! Follow the example of Columbia (photo from "The Dartmouth")!

These veterans have served our nation and it’s now time for our nation to serve them. Ivy League campuses need to open their doors to more veterans. If they think they’ve admitted enough, they’re mistaken. According to “Business Week,” Princeton University said it has four veterans enrolled! Four! Shame on Princeton! Brown has 12. Shame on Brown! Dartmouth, we know you’re trying to increase the number of veterans on campus. Your former president, James Wright, is perhaps the biggest advocate higher education has for opening up doors in higher education to returning soldiers.

Yale says that it has filled 13 of the 50 slots under the “Yellow Ribbon Program” to provide financial aid from the federal government to soldiers. What’s going on with the other 37 slots, Yale? Fill them! Follow in Columbia’s lead. Columbia has enrolled 459 veterans since 2009, according to the “Business Week” article on veterans in the Ivy League published subsequent to this blog. And Harvard has enrolled about 250 during that same time frame.