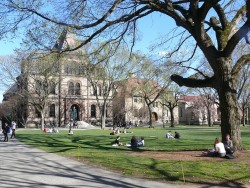 Tuition at Brown is on the rise. Shocker? No (photo credit: Ad Meskens).

Tuition at Brown is on the rise. But this should surely come as no surprise as tuition rises every year, just as it does at highly selective colleges across the board. And if you’re thinking that tuition rises at the rate of inflation, no way. The tuition hike for this coming academic year at Brown will be 4.1%, meaning that tuition will be about $64,566. But a 4.1% hike isn’t as bad as last year’s hike which stood at 4.4%. It happened to be only a 3.8% hike the year before but who needs to know that!

According to a piece on Brown’s tuition hike authored by Kate Talerico for “The Brown Daily Herald,” “The University has raised over $1 billion of the $3 billion it hopes to secure in the BrownTogether capital campaign, announced President Christina Paxson P’19 in a community-wide email Saturday following a meeting of the Corporation, the University’s highest governing body. This milestone ‘provides exciting momentum as we continue seeking investment for the BrownTogether campaign,’ Paxson wrote in an email to The Herald. The Corporation also formally and unanimously endorsed an action plan released Monday that allocates $165 million — or 5.5 percent of the funds to be raised in BrownTogether — to boost the diversity and inclusiveness of the Brown community.”

Everything that goes up must come down. Except college tuition of course — in defiance of the laws of physics.

For those folks who raise their eyebrows at our fees here at Ivy Coach (hey, we’ll own it!), we suggest you think about our fees in this context: The cost of attending a good or great school is a whole lot closer to $100,000 these days than it is to $50,000 when it’s all added together. Why not make sure those tuition dollars go to a great school instead of a good school to get your much desired return on investment? Or, alternatively, be happy at the good school.