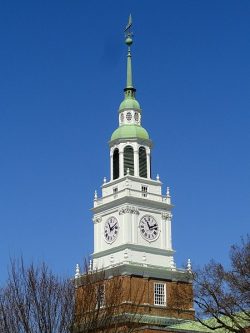 As the #MeToo movement continues to gain steam across not only the entertainment industry but other industries as well, higher education has proven to not be immune to new reports of sexual harassment. In a piece today in “The New York Times,” it was brought to light that three Dartmouth professors in the Department of Psychological & Brain Sciences are currently under investigation for sexual misconduct. As “The New York Times” points out, some of these professors have led studies on sexual attractiveness and desire. One of these professors taught an “Interpersonal Relationships” class through the department, which we happen to believe was one of the best courses offered at Dartmouth. But of course that’s not relevant to the alleged actions of these professors.

As Katherine Q. Seelye and Stephanie Saul report for “The New York Times” in a piece entitled “Dartmouth College Professors Investigated for Alleged Sexual Misconduct,” “Attorney General Gordon J. MacDonald of New Hampshire said his office was part of a joint criminal investigation by five law enforcement agencies into allegations of ‘serious misconduct’ by the professors, all tenured faculty members of the Department of Psychological and Brain Sciences. The professors’ access to the Dartmouth campus here has been restricted. Details of the allegations were not released, but Mr. MacDonald’s statement said the criminal investigation arose after an inquiry to college officials by the college newspaper, The Dartmouth, which reported last week that the professors had disappeared from their campus posts and fliers had been posted around campus inquiring as to their whereabouts. At that time, the college announced that it was conducting its own investigation.”

While three Dartmouth professors are under investigation for sexual misconduct, we strongly suspect that similar reports will surface in the weeks and months ahead at other highly selective universities. After all, these kinds of incidences can occur at any institution. One benefit to attending an Ivy League school is that when incidences like these do happen, the school’s reputation doesn’t take a major hit because the school will always be a member of the Ivy League — and why should innocent students and other faculty be punished for the egregious actions of a few professors? They shouldn’t. But may the investigation of these three professors serve as a warning to college professors and students across the land that sexual misconduct isn’t nor will it ever be ok.