The Ivy League and Politics

Many believe that universities across the country are overwhelmingly liberal. We’re not going to dispute that. Some believe the universities in The Ivy League are the most liberal of all. We’re not so sure about that but our objective is not to dispute this either. Rather, we’d like to share an anecdote that captures the diversity of political thought on an Ivy League campus. What might be true of one Ivy League campus can well be true of all. Well, maybe not Brown! 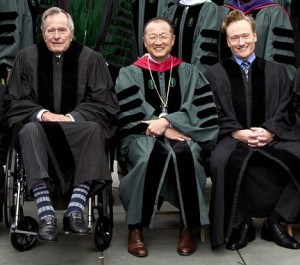 Diversity of political thought on Ivy League campuses counts for diversity too!

At the recent Dartmouth commencement ceremony for the Class of 2011 now made famous by Conan O’Brien’s commencement speech that went viral, former President George H.W. Bush was also honored. While many professors signed a petition protesting the decision to award President Bush an honorary degree and several students at the commencement ceremony disrespectfully stood with their backs to the former president as he received his degree (some holding anti-Bush signs), the crowd broke out singing an impromptu “Happy Birthday, Mr. President” when he left the stage. It was, after all, President Bush’s 87th birthday on the day of Dartmouth’s commencement.

Are there liberal professors at Dartmouth? Yes. Are there conservative ones? You bet. And what about alums? Conservative talk radio pundit Laura Ingraham as well as noted author Dinish D’Souza are Big Green alums and got their starts working for “The Dartmouth Review.” The Ivy League and conservative politics are not mutually exclusive.