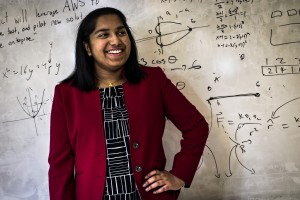 We at Ivy Coach wish to extend a heartfelt congratulations to Pooja (photo credit: J. Lawler Duggan, “The Washington Post”).

We at Ivy Coach would like to extend a special, heartfelt congratulations to Pooja Chandrashekar of Thomas Jefferson High School for Science and Technology, the Virginia student who is ALL OVER the news these days for gaining admission not only to each of the eight Ivy League colleges but for having gone 14/14 with additional acceptances to Stanford, MIT, Duke, UVA, Michigan, and Georgia Tech. We’ve written in previous years about students who have gained admission to each of the eight Ivy League colleges, like last year when Kwasi Enan gained admission to each member institution of the Ancient Eight. But Pooja’s case for admission — especially as an Indian applicant when Indians and Indian Americans face such discrimination in the highly selective college admissions process — is a very special one and she is indeed a very special young woman.

A piece in “The Washington Post” on Pooja, among tons of other articles in newspapers around the world, focuses on her great GPA and test scores, the fact that she started a really impressive nonprofit, and how she wants to inspire other young women to go into science, technology, math, and engineering programs. And it focuses on an app she developed that can quite accurately predict if a person has Parkinson’s disease by measuring speech patterns. She also contributed to developing an app to rapidly diagnose concussions, like on the sidelines of football games. It’s rather remarkable.

What’s especially cool about Pooja’s sweep of the Ivies and other highly selective colleges like Stanford, MIT, and Duke is that Pooja gained admission to these schools with an Indian profile — that is an Indian profile taken to Herculean heights. She is a math, science, and computer whiz kid. And Indians do face discrimination for fitting a certain profile, which we’ve discussed on many occasions on the pages of our college admissions blog. But, in the case of Pooja, her profile was just the very best. And that, in a line, is what Pooja is…the very best. Congratulations, Pooja!!!!!!!!!!