Private Feeder Schools to the Ivies 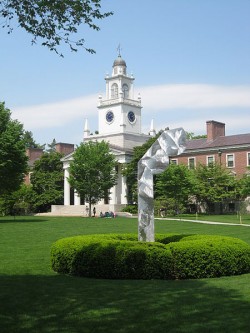 Andover has ties to the Ivies that date back generations.

There was a time — ok, a long time — in which the vast majority of students at Ivy League colleges hailed from a handful of elite private high schools. And while that hasn’t been the case for decades, there are still very much private schools that are essentially feeder schools to the Ivy League colleges. You can probably think of a few off the top of your head, like Andover, Exeter, and Choate. An article released recently by “The Street” entitled “Top US Private Schools with the Most Graduates Getting Into Ivy League Universities” well articulates which private schools are best at sending their graduates to the eight member institutions of the Ivy League. We figured we’d share some of this data with our loyal readers.

About 29% of graduates of The College Preparatory School in Oakland, California (a.k.a. College Prep) are admitted annually to one or more Ivy League colleges. Phillips Exeter Academy in Exeter, New Hampshire, the alma mater of Facebook’s Mark Zuckerberg, has about the same statistic. At The Harvard-Westlake School in Los Angeles, California, about 30% of grads get into an Ivy. At Chapin, on Manhattan’s Upper East Side, the statistic is also about 30%. At St. Paul’s School in Concord, New Hampshire, the statistic is — you guessed it — about 30%, too. At The Dalton School off Park Avenue in Manhattan, alma mater of Anderson Cooper, the statistic is about 31%. Same for the all-girls The Windsor School in Boston, Massachusetts (about 31%).

What do you think about this data from these private schools? We’re curious to hear from our readers. So post a Comment below.

Feeder Schools to the Ivies