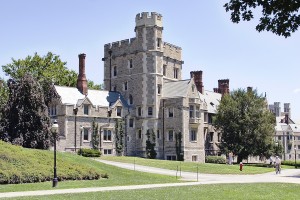 Princeton had implemented a grade deflation policy some years ago but that policy looks like it may be on the way out (photo credit: Alfred Hutter).

A report recently released by Princeton University on grade inflation indicates that grade inflation remains rampant at the university, despite a grade deflation policy implemented in the mid-2000’s. According to an article on Princeton grade inflation in “The Daily Princetonian,” “The report, which was prepared at the request of University President Christopher Eisgruber ’83 after only a few months in office, suggests that the controversial grade deflation policy has had little direct effect on grading. Implementation began in the fall of 2005 at a time when A-grades and GPA averages had decreased significantly already, only to increase unabated soon after the policy was put in practice, the report noted.”

Among academic departments at Princeton, it was the engineering department that best abided by the grade deflation policy. But this grade deflation policy — which has remained in place for several years now — could well be on its way out. As the Princeton president, Christopher Eisgruber, stated to “The Daily Princetonian,” ““I think it’s really important that Princeton be known for the quality of its teaching rather than for the severity of its curve.” Well said indeed. The president is going to meet with Princeton’s faculty committee to discuss the findings of the grade inflation report in September. With grade inflation rampant at Harvard University — and it has been rampant there for years, it was fairly brave of Princeton to implement this policy. After all, a grade deflation policy could have had a negative impact on graduate school admissions, job placement, etc. — all important data for a top university.

Ultimately, Princeton felt they had a problem, they tried something new for some time, reexamined the data, and now they’re likely concluding that how they addressed the problem wasn’t effective. That seems like good leadership and good policy to us. We’re curious to see how they address grading from here at one of America’s most prestigious universities.

While you’re here, read about admission to Princeton.