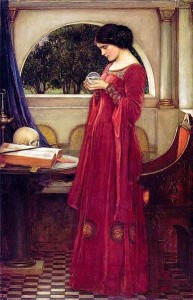 Ivy Coach has a crystal ball that can predict one’s chances of admission to Ivy League and other highly selective colleges.

So when parents say something along these lines to us, we reference our crystal ball as it’s the best way that we know how to convey to them what we think: “I want my son to apply Early Decision to Penn. I know it’s an extreme reach for him but I don’t want him wondering his whole life if he could have gotten in. His best shot of getting into Penn is to apply Early Decision so we might as well have him apply and roll the dice. Right?” Wrong, wrong, wrong.

And as for the woman in the painting to the right, she is not an employee of Ivy Coach but she’s got a crystal ball just like us! And that’s some gown!