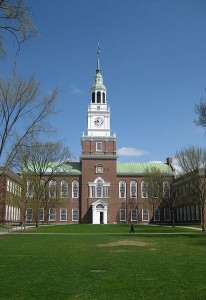 Much attention has been paid in the press of late to a new Dartmouth policy, one instituted by its relatively new president, Philip J. Hanlon. Dartmouth College will ban hard alcohol on campus and, in so doing, lead the charge amongst colleges in the fight for healthier and safer college campuses. We at Ivy Coach salute Philip Hanlon and Dartmouth College for taking the lead on this important issue. To this day, there are still those who still associate Dartmouth College with the movie “Animal House.” The movie, written by a Dartmouth alumnus, was inspired by his college experience. It was an unfair association but an association nonetheless. Are fraternities big at Dartmouth? Yes. But they’re big at many schools across America. And now Dartmouth is doing more than any other college that we can think of in America to keep its students safe from the perils of binge drinking.

Underage drinking happens on every college campus. It’s an indisputable fact and it would be impossible to stop underage drinking on these campuses. Most people tend to get this. But President Hanlon, whose background is in mathematics, is addressing the problem head-on with a policy that is essentially quite similar to ”broken windows policing.’ And ‘broken windows policing,’ while controversial at times, is quite effective. Read “Freakonomics.” Painting over graffiti in subways quickly after it goes up reduces crime. Addressing small offenses disinclines people to commit big offenses. Rape and murders go down in cities when graffiti artists are ticketed, as absurd as that may seem.

As Hanlon told the Dartmouth community in his Moving Dartmouth Forward plan, “To truly create a safe environment—and one that is advantageous to learning—we will also have to tackle the challenge of excessive drinking. Dartmouth will take the lead among colleges and universities in eliminating hard alcohol on campus. Dartmouth’s new alcohol policy for students will prohibit the possession or consumption of ‘hard alcohol’ (i.e., alcohol that is 30 proof or higher) on campus by individuals, including those over the legal drinking age, and by Dartmouth College-recognized organizations. In addition, we will ask that the entire campus community follow suit and not serve hard alcohol at college-sponsored events and be role models for the healthy consumption of alcohol. The key to the successful implementation of any policy change is a clear path for enforcement. To this end, we will require third-party security and bartenders for social events. We will also increase penalties for students found in possession of hard alcohol, especially for those students who purchase and provide alcohol to minors.”

It’s certainly a bold, unprecedented step on a major American university campus. We’re curious to see how this all plays out. And we’re curious to hear what you think about the new Dartmouth policy so let us know your thoughts by posting a Comment below.