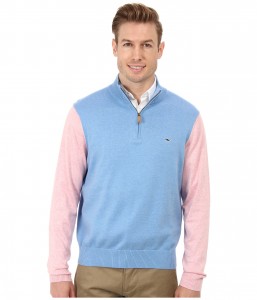 Not everyone at Ivy League colleges wears Vineyard Vines and it’s important to know that.

There’s a piece up on “CNN Money” by Emily Jane Fox entitled “Poor Kids, Rich Schools” that we figured we’d comment on. The piece focuses on how many students at highly selective colleges come from middle or low income families — many of whom are the first in their families to attend college — and it’s often a culture shock for these students when they enroll at universities such as Harvard and the University of Chicago, among many other highly selective institutions such as the other seven Ivy League institutions (in addition to Harvard). As one sophomore at Harvard, Ted White, puts it, as referenced in the piece: “One day, four men in a class of 12 students came in wearing Vineyard Vines button-ups and loafers,” [White] said. Vineyard Vines and Top-Siders are indeed rather ubiquitous on Ivy League college campuses. There’s no denying this. And a story such as the one that White recounts is by no means unusual.

But it’s nice to see that colleges are doing more to help put students from low and middle class backgrounds on more of a level playing field with their upper-crust classmates. As Fox writes, “In recent years, students have formed groups like UChicago’s Socioeconomic Diversity Alliance, Columbia’s First-Generation Low-Income Partnership (FLIP) and Harvard’s First Generation Student Union (FGSU) to inform other students and work with administrators to ease some of the burdens. Harvard’s FGSU, for example, successfully campaigned to keep two of the school’s dining halls open during spring break. Before, students were left to ‘either go buy expensive food in Harvard Square or starve,” sai’ Ana Barros, the group’s president.”

It’s important for low and middle income students to know that they are not outsiders at highly selective colleges. Yes, of course there are lots of students who come from Greenwich, Connecticut and Bellevue, Washington. Yes, of course there are students at these schools whose last names are on the facades of buildings. But as this article correctly points out, at Harvard “20% of parents earn less than $65,000.” So these middle and low income students need to know that they’re not alone, that not everyone at Harvard owns Top-Siders and sports Vineyard Vines. Or Patagonia for that matter.