Jewish Applicants to the Ivy League 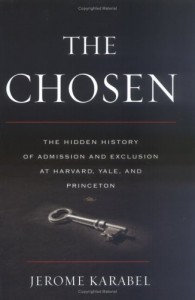 Jerome Karabel has written a great book on the history of discrimination at Harvard, Yale, and Princeton against Jewish applicants.

If you are a Jewish applicant to any of the eight Ivy League colleges or another highly selective college that is not among the Ancient Eight, we thought you might like to check out Jerome Karabel’s “The Chosen: The Hidden History of Admission and Exclusion at Harvard, Yale, and Princeton.” Side note: Did you know that Chaim Potok, author of “The Chosen,” served as a professor at Penn for many years? Anyhow, we’ve long had an interest in the history of discrimination in the admissions process to Ivy League and other highly selective colleges and as our Founder, Bev Taylor, also happens to be Jewish (fun fact: she’s a cousin of Major League Baseball legend Sandy Koufax who refused to pitch in a game of the World Series because it fell on Yom Kippur), Karabel’s book topped her favorite reads list this year.

One of the evil protagonists in Karabel’s book is a former president of Harvard, Lawrence Lowell. The man presided at the institution for nearly a quarter century. Karabel offers quite a lot of evidence of Lowell’s anti-Semitism in his book, including recounting a story in which Lowell wrote a Harvard philosophy professor that admitting Jewish students would cause harm to the university because their matriculation would discourage Protestants from attending. He thus backed the policy of strict quotas and oversaw a reduction in the number of Jewish students attending Harvard. It’s no surprise that Lowell later led the charge against the confirmation of America’s first Jewish Supreme Court Justice, Louis Brandeis (after whom Brandeis University is named). We’re sure glad he lost that battle and we’re sure glad Lowell no longer leads an Ivy League institution. But discrimination against Jewish students was not the exclusive policy of Harvard, Yale, and Princeton. Those are just the schools Karabel focuses on. Discrimination against Jewish students was prevalent at many highly selective universities.

So how has the landscape changed? Well, now there are several highly selective colleges where being Jewish can actually help students gain admission. There are schools that have a difficult time attracting Jewish applicants to apply and thus they become a coveted group. We’ve never listed these elite institutions on our blog because much of our expertise we keep to ourselves. After all, we’re a business and we want to give our own students every advantage possible. Oh, and one last point: Elite universities may not discriminate against Jewish students any longer but they sure do discriminate against Asian and Asian-American applicants! And it’s high time this discrimination comes to an end!

The Decline in Jewish Students on Ivy League Campuses