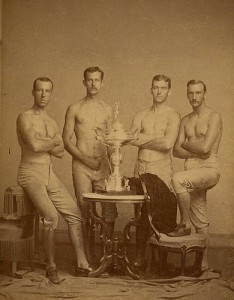 These four Yale men are totally unrelated to our story. But three other Yale graduates just secured a fifteen million dollar investment in their company from Andreesen Horowitz.

We always like to highlight Ivy League successful entrepreneurs — especially since a Princeton professor claimed last year that successful entrepreneurs don’t graduate from Ivy League schools. We beg to differ. A little while back, we highlighted Dartmouth alumnus Mike Hartwick, who founded an exercise machine that essentially mimics surfing (inside). He went on ABC’s “Shark Tank” and secured Mark Cuban as an investor. The guy’s five years out of college and he already has billionaire mogul Mark Cuban as a business partner. Pretty cool, eh? For $350,000, Cuban now owns 30% of his company. Today, we’d like to highlight the company of three Yale University graduates – Mahbod Moghadam, Ilan Zechory, and Tom Lehman.

Moghadam is a lawyer, Zechory a Google project manager, and Lehman an engineer. Together, they founded “Rap Genius.” “Rap Genius” essentially provides explanations about rap lyrics. Yes, you read that right. The three co-founders have secured an investment from VC firm Andreesen Horowitz (yes — Mark Andreesen…the creator of Netscape Navigator who even happens to have significant equity in major Hollywood talent agency William Morris Endeavor, among many other ventures). And how big is the investment? To the tune of fifteen million.

Wrote Andreesen, “First, there is the undeniable, irrepressable phenomenon that Rap Genius already is – the definitive online community of rap aficionados; one of the fastest growing web sites in Y Combinator’s history; a thriving ecosystem of ideas, artists, and fans. Second, there is the stellar team. Rap Genius has the rare balance you always hope for in a startup team – three founders, each with unique skills, who mesh perfectly. Mahbod is the most brilliant community creator we’ve seen since Caterina Fake’s heyday at Flickr. CEO Tom shares Jeff Bezos’s D.E. Shaw pedigree and codes up a storm. And former ‘Deadwood’ writer Ilan serves as impresario and runs the show.”

We wish them much success. Although we do have one fact check that we’re wondering about. There is no record of Mr. Zechory ever having written for “Deadwood” on either “IMDB” or “StudioSystem.” In fact, he graduated from Yale in 2006. “Deadwood” went off the air in 2006. Maybe he was an intern in college? We hope this isn’t why Mr. Andreesen made his fifteen million dollar investment (although we’re sure it’s not).