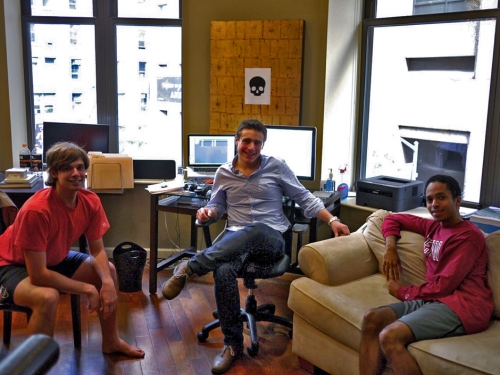 These three Penn dropouts hope that Coursekit will supplant Blackboard as the leader in online course management (photo credit: Joseph Cohen as featured in “The Daily Pennsylvanian”).

At the University of Pennsylvania, three students recently put their educations on hold in order to pursue their startup – Coursekit, according to an article on the three Penn students by Julie Xie in “The Daily Pennsylvanian.” The three students – Joseph Cohen, Dan Getelman, and Jim Grandpre – hope that Coursekit will replace Blackboard as the leading online course management system. Designed with inspiration from Facebook and various social networking sites, Coursekit will have a wall where students and professors can share posts. It’ll have an interactive calendar and, like Blackboard, the syllabus for each course will be posted.

Courskit, which was awarded $10,000 by the Wharton Venture Award in May has already raised $1 million dollars in seed financing from VC firms. The Ivy League students’ Penn connections, they believe, made their startup possible. For further reading, check out our post on the Ivy League’s Influence on Career.