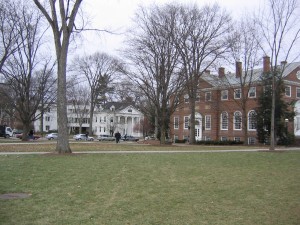 Mindy Kaling walked the ground of this college campus as a student.

So who are the Ivy League stars? Have you seen Kate McKinnon on “SNL”? She graduated in 2006 from Columbia University. You know who also went to Columbia? Jenny Slate. You might know her from a year of doing “SNL” and for a role on HBO’s “Bored To Death.” What about Jane Lynch? Do you know her? Maybe you know her from “Glee.” After all, she is Sue Sylvester, an iconic television character of our time. Jane Lynch is a graduate of Cornell University. Jennifer Westfeldt from “Friends With Kids?” Yale University.

And how about “The Office’s” Ellie Kemper? Ellie is a graduate of Princeton University. What about Rashida Jones, also of “The Office” (in addition to a great role in “The Social Network”)? She is a graduate of Harvard University, where she graduated in 1997 as a religion and philosophy major. Vanessa Bayer graduated in 2004 from the University of Pennsylvania, where she was a communications major. Vanessa has appeared on “Sesame Street” and “Late Night with Conan O’Brien.”

Connie Britton of “Friday Night Lights” and “Nashville” fame? Connie is a Dartmouth College alumna. As is Mindy Kaling, even though her character went to Princeton in her FOX series, “The Mindy Project.” And, no, Ellen Pompeo did not attend Dartmouth, even though her character on “Grey’s Anatomy” did. That’s only because Shonda Rhimes attended the College on the Hill. Anyhow, hat tip to “Guest of a Guest” for the alma maters of some of these leading ladies.