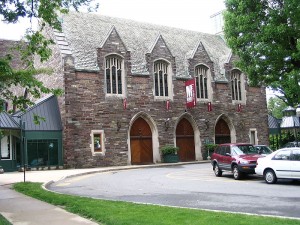 Did you or your child receive a rejection letter from an Ivy League college yesterday? As you know, you’re not alone. Tens of thousands of applicants received these very letters. So now that your dreams of studying poetry under a tree at the same college that Robert Frost and Dr. Seuss once attended or where Woodrow Wilson once presided as university president prior to his inauguration as President of the United States have been crushed, you’re at a crossroads. But to (loosely) paraphrase Robert Frost, when two roads diverge in a wood, just get on a road and take it. You’ll find you can reach great heights in life with or without an Ivy League education.

Today can in fact be the beginning of that very road to success. Oh stop rolling your eyes! Have you ever noticed that the sons and daughters of highly successful people often don’t amount to much? Are there exceptions? Yes. Chelsea Clinton is an overachiever just like her parents, Bill and Hillary. But Chelsea Clinton is the exception to the rule — not the rule. Similarly, your Ivy League rejection can now be your impetus, your motivation for success in life. Princeton and Dartmouth didn’t think you were good enough? They didn’t have room for you? They didn’t think you could add to their diverse and talented student body? Well, now is the time to begin getting even and achieve successes that even your Ivy League counterparts may never achieve.

In a landmark study by Alan B. Krueger of Princeton University and Stacy Dale of Mathematica Policy Research, it was discovered that those who had been rejected by Ivy League colleges actually make the same amount of money throughout their lives as Ivy League graduates. According to the Moneywatch article, “Students, who possessed high standardized test scores, yet were rejected from Ivy League-caliber institutions, were banking the same average earnings as Ivy League graduates. A rejected Yale applicant with a high SAT score, for example, who ends up attending the University of Miami or Tulane University would earn as much, on average, as Yale grads. ‘The highest ranked school that rejected a student is a much stronger predictor of that student’s subsequent earnings than the average SAT score of the school the student actually attend,’ the study observed.”

So, basically, students who have the confidence to apply to Ivy League colleges, even if they are rejected, will find success in life. Don’t believe us? Ever heard of Tom Brokaw, the respected journalist and former face of NBC news? What about Lee Bollinger, the sitting president of Columbia University? How about John Kerry, the Massachusetts senator who earned a Silver Star in Vietnam? Warren Buffett? Meredith Vieira? The list goes on and on and on…

And check out our post: There is life after being rejected.