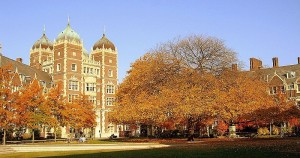 Too many Ivy League athletes quit their respective sports for which they were recruited. And, in most cases, it’s a reflection on their character (photo credit: Bryan Y.W. Shin).

There’s an interesting editorial in “The Huffington Post” that we wanted to bring to the attention of our loyal readers. Written by Jennie Shulkin, a junior at the University of Pennsylvania, and entitled “Ivy League Quitters: The Costs of Being an Ivy Athlete,” the piece discusses how many students who are recruited to compete for an Ivy League athletic team quit at some point during their college experience. This trend has indeed been well known for some time and Shulkin points out the chief reason for the trend: the fact that Ivy League colleges do not offer athletic scholarships. Student-athletes, while they make a commitment to their Ivy League coaches and teams, often renege on these promises and there’s nothing the coach — or the school — can do about it. After all, they can’t revoke a scholarship the student wasn’t receiving in the first place.

Shulkin seeks change — she doesn’t like the fact that she knows as many Ivy League athlete quitters as she does students who continue to compete for their respective Ivy League teams. She believes the Ivy League — and its eight institutions — should make it easier for Ivy League athletes so the cost-benefit analysis for athletes more favorably tilts towards benefits. That’s all fine and well. But what about these students who make commitments to their coaches and schools only to go back on their promises? That is not ok!

If you’re recruited to swim at, say, Princeton and then you quit within the first two weeks of your freshman year, that is a reflection on your character. You gave it a week? You got into Princeton — in all likelihood — in large part due to your swimming prowess so your decision to quit is: Just. Plain. Lame. Shulkin herself wasn’t recruited to play squash at Penn. When she earned her admission, she contacted the coach and was promised a spot. She ended up playing for a couple of years before choosing to quit. Good for Shulkin to walk onto a Division 1 athletic team! We are certainly not criticizing a walk-on for quitting — she lasted longer than many recruits do — but we are criticizing all of the Ivy League athletes who are recruited and go back on their word. It’s just not right.