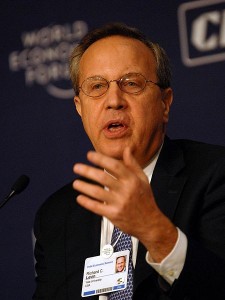 Richard Levin of Yale University had the highest salary in the Ivy League as of 2009 (photo credit: World Economic Forum / Photo by Norbert Schiller).

Ever wonder what the Ivy League presidents cash in every year? Wonder no longer as we have that information for you! So who makes the most? According to Janet Lorin of “Bloomberg News,” that title belongs to Yale University’s Richard Levin. As of 2009, Levin’s salary was $1.63 million in total compensation. According to Lorin’s article in which she cites data from “The Chronicle of Higher Education,” Levin in fact received the “ninth-highest compensation of all college leaders in calendar 2009.”

So who do you think is overpaid? Anyone you think is underpaid? These college presidents will be meeting with Barack Obama today to discuss higher education. Do you think he’ll bring up their salaries? Probably not. Let us know your thoughts by posting below!