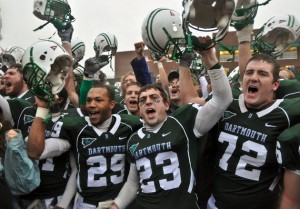 It is our prediction that Dartmouth College, ranked second in the 2015 Ivy League Football Preseason Media Poll, will upset Harvard this year and reclaim the Ivy League football title. You heard it here first.

We’re excited to see what’s in store for this Ivy League football season. Will Dartmouth College reclaim the Ivy League crown, something that has eluded the College on the Hill for many years? Will Al Bagnoli lead a resurgence for Columbia, a university that claimed the Rose Bowl title in 1934 under the masterful play of our dear friend, and an inspiration for the formation of Ivy Coach over a quarter century ago, Cliff Montgomery? Will Harvard win it all again? We’re pumped to see it all play out on the gridiron.