Which Ivy (or non-Ivy) has the students with the highest cognitive ability, you ask? We came across an article in “The Harvard Crimson” yesterday that describes a study conducted by Lumosity in which the company examined more than 60,000 college students on over 400 American college campuses. So what did this company examine? Well, according to “The Harvard Crimson,” “this study analyzed results from online games that use neuroscience to measure five aspects that contribute to intelligence: speed, attention, flexibility, memory, and problem solving.” So are you curious which universities had the students with the highest cognitive ability? We’re a bit curious ourselves! 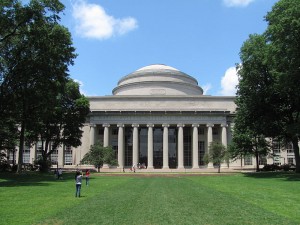 MIT may not be in the Ivy League but MIT students edged out Harvard students in a study of cognitive abilities. Some schools compete on the football gridiron. Others compete in studies like these (photo credit: John Phelan).

It turns out MIT students top the results, edging out Harvard students (score one for the non-Ivy Leaguers). Stanford, Northwestern, and Yale students follow right behind. According to “The Harvard Crimson,” “The study also broke down each of the five cognitive areas: Harvard students topped in speed, Dartmouth in attention, Yale in flexibility, …the Rose-Hulman Institute of Technology in memory, and MIT in problem-solving.” Fascinating, huh? And apparently problem-solving scores correlated strongly with a school’s median SAT scores (as reported by “US News & World Report”).