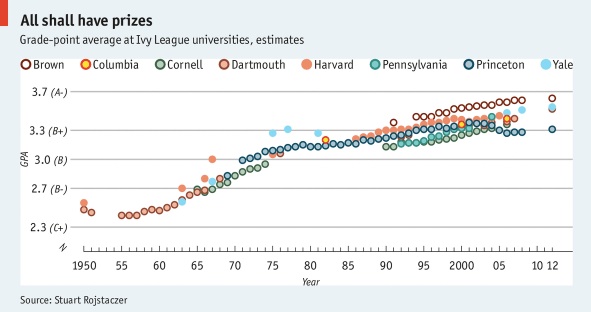 Grade inflation has been on the rise for years at the Ivies (chart from “The Economist”).

There is an interesting piece in “The Economist” cutely titled “Grade expectations” that we figured we’d share with our reader base. We’ve written before about grade inflation at Harvard. It was among the most popular posts ever on our college admissions blog. As you may know, Harvard has had a reputation for grade inflation for years. The running joke is that while getting into Harvard might be extremely tough, graduating from Harvard is as easy as pie. The most common grade given to Harvard students is an ‘A.’ It says it all. But grade inflation is not exclusive to Harvard among the Ancient Eight institutions. We’ve also written, for instance, on how grade inflation is rampant at Princeton University.

But check out the chart above from “The Economist.” As you’ll note, estimates for the grade point averages at each of the eight Ivy institutions are jarring. While in the 1950’s and 1960’s, average grade point averages were typically between around a 2.3 and a 2.8., now the same figure is typically between a 3.3 and a 3.7 at the eight Ivy League institutions. That’s a major change over the course of the last 60+ years. As noted in “The Economist,” “Are they trying to hide something? Perhaps. Stuart Rojstaczer, a critic of grade inflation, has estimated average grades over time by combining dozens of unofficial and official sources. The results are startling (see chart). In 1950, Mr Rojstaczer estimates, Harvard’s average grade was a C-plus. An article from 2013 in the Harvard Crimson, a student newspaper, revealed that the median grade had soared to A-minus: the most commonly awarded grade is an A. The students may be much cleverer than before: the Ivies are no longer gentlemen’s clubs for rich knuckleheads. But most probably, their marks mean less.” They sure seem to!