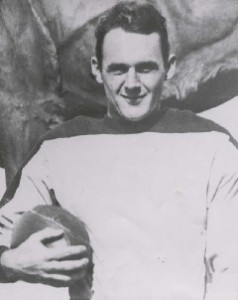 Our dear friend, Cliff Montgomery, led Columbia University to a Rose Bowl victory in 1934. That was a long time ago. Columbia currently sits in last place in the Ivy League football standings.

Harvard has won seven straight games and Brown six straight. On the other side, Princeton has lost five straight games, while Columbia has lost eight in a row. It’s not a good year to be a Columbia Lion football player. So let’s cheer up Columbia fans with a bit of Columbia football history.

Did you know that the Columbia Lions won the 1934 Rose Bowl in a 7-0 upset over Stanford? It was largely considered to be one of the greatest athletic contests of the twentieth century. The game’s MVP was our dear friend, the late QB Cliff Montgomery – a veritable American hero who would go on to earn the Silver Star in WWII for saving the lives of 400 sailors at Okinawa. The Rose Bowl win may seem like a long time ago to Columbia University football fans. It sure was. But that doesn’t mean Columbia can’t turn things around on the gridiron…though this season is out! There’s no coming back from 0-8!

While you’re here, check out this post on the Ivy League and NFL.