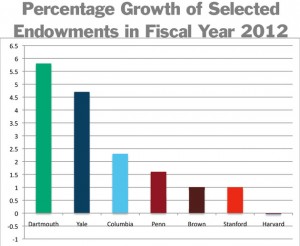 Dartmouth College had the highest return on their endowment in Fiscal Year 2012 among Ivy League colleges reporting data (graph from “The Dartmouth” by Maggie Rowland, “The Dartmouth” Senior Staff).

According to “The Dartmouth,” Yale University had the second highest return for the current fiscal year with a 4.7% return. Columbia had a 2.3% return. Penn? A 1.6% return. Harvard? Well, their huge endowment didn’t post a return. Instead, the university posted a loss of 0.05%. Cornell University hasn’t yet released its figures. Brown posted a 1% return. And Princeton’s data also isn’t yet available, though its president said the university’s endowment likely earned between 0 and 5%, according to “The Dartmouth” which referenced “Businessweek.”

So who do you think is handling Harvard’s money? Do you think they’ve got some explaining to do when all of the other Ivy League schools reporting data cited returns? Keep in mind that Harvard University has the largest endowment of any university in the United States, but a horse is a horse and a loss is a loss. Let us know your thoughts on the Ivy League endowment numbers by posting below!