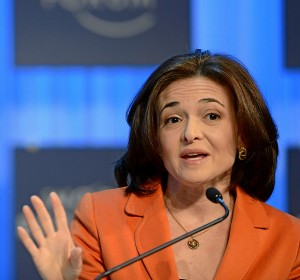 Sheryl Sandberg is among the Ivy Leaguers on the “Forbes” most powerful women list (photo credit: World Economic Forum from Cologny, Switzerland).

Ivy League diplomas can indeed lead to great power! There was a great article in “Forbes” a few days back by Moira Forbes entitled “Does A Diploma From An Ivy League School Still Matter?” We’ve focused before on how students who even have the chutzpah to apply to Ivy League colleges (regardless of whether or not they gain admission) earn significantly more in their careers than do students who do not apply to Ivy League colleges. But this “Forbes” article focuses specifically on “Forbes'” list of the 100 most powerful women. Interestingly, of the 100 women on the list, 30 attended one of the eight Ivy League universities. 13 of these 100 women did not attend college. So of the women that attended college on the list of 100 most powerful women, over 34% is Ivy League-affiliated.

According to the “Forbes” article, “To put that in context, there are only 8 such schools with the Ivy moniker out of the tens of thousands around the world. These numbers are all the more remarkable in light of the fact that the majority of these schools only started accepting women in the late 1960’s, early 70’s (with Columbia University in New York being the final hold-out, not admitting women until 1982).” It is kind of incredible then that so many of the “most powerful women in the world” attended one of these eight institutions then, right? Especially considering co-education only began relatively recently at some of these universities.

From Meg Whitman to Michelle Obama to Sheryl Sandberg, these powerful women have their Ivy League diplomas in common. What do you think about that? Does it surprise you that such a high percentage of the “Forbes” list of the most powerful women attended Harvard, Dartmouth, Columbia, Penn, Princeton, Yale, Brown, or Cornell? Let us know your thoughts by posting below!