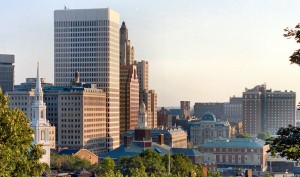 So many Ivy League graduates say they went to school in Providence or Boston. It’s ok to say that you went to Brown or Harvard (photo credit: Will Hart).

People often ask you where you went to college. For many students who attended Ivy League universities, they often choose to respond to that question in a similar fashion. Let’s play out the scenario for you. A coworker asks, “Where did you go to school?” The Ivy Leaguer responds, “High school?” “No, college,” answers the coworker. “Oh. I went to school in New Jersey.” “Oh, you went to Rutgers,” asks the coworker. At this point, the Ivy Leaguer has no choice but to say, “Princeton.” There’s even a funny YouTube video that was recently posted about these very scenarios. We didn’t link to it, though, because some of the content wasn’t appropriate. But it’s funny nonetheless.

That answer is…they’re just insecure. Don’t be ashamed of where you went to school, Ivy League graduates. Be proud to wear the sweatshirt of your alma mater. There’s no need to say that you went to school in New Haven. Or Providence. It’s okay to tell the whole truth rather than vaguely cite Ivy League cities!

While you’re here, check out our Ivy League Admissions Statistics.