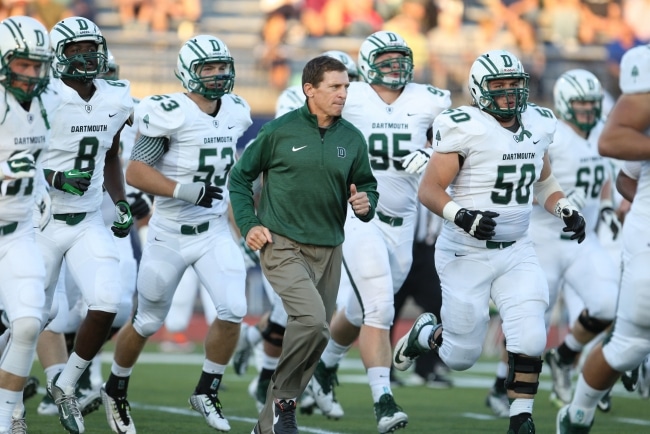 The team that plays with robots (in practice) to reduce concussions is changing the game of football. And today, they’re also Ivy League champions.

Congratulations to the Dartmouth College Big Green on their Ivy League football title earned this afternoon. As reported by “Dartmouth Sports,” “The 6,208 fans in attendance got to witness the first Ivy title for Dartmouth (9-1, 6-1 Ivy) since 1996 but 18th overall, more than any other school in the Ancient Eight.” The University of Pennsylvania is currently up 34-14 on Cornell University, so it looks like the Quakers will claim a share of the title too. Harvard University also will have a shot to claim a share of the Ivy League crown — though they still have work ahead of them, with The Game (Harvard vs. Yale) on their docket today. With the University of Pennsylvania’s upset over Harvard University last week, that set the stage for a chance at a three-way tie for the title.

Princeton was leading through almost all of the game today against Dartmouth, carrying a 10-7 lead into the 4th. Dartmouth would then tie up the score, intercept a pass, and set up a Dartmouth touchdown (after a fumble on this possession that was recovered by the Big Green athlete who would score on the next possession). With the Dartmouth victory today, the Big Green maintained its stronghold on Ivy League football titles in history. Had Dartmouth lost and had Harvard won, Dartmouth and Harvard would be tied for the most Ivy League football titles in league history. But with the Dartmouth win, Dartmouth can claim this distinction on its own — whether Harvard wins later today or loses.

Note that we predicted that Dartmouth College would claim the Ivy League crown this year during the college football preseason. We may have also predicted that the Big Green would upset the Crimson, but they sure did come close in that contest in which they led the whole way — until the final thirty-eight seconds. So we’ll call it a win.