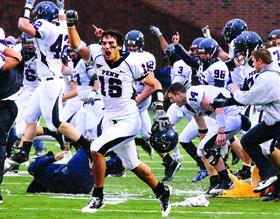 A preseason poll forecasting the seasons of Ivy League football teams has come out this week and the University of Pennsylvania has been projected to win the Ivy League, collecting 12 of 17 first-place votes. Following Penn is Harvard and then Yale, Brown, Dartmouth, Columbia, Princeton, and Cornell, respectively. Penn has won the last two Ivy League titles so it is no surprise that they’ve been projected to earn another championship. They also boast a 15-game winning streak in Ivy League play, a streak spanning over two football seasons.

And now for some Ivy League football trivia to get you ready for the upcoming season! Post your answers below!

– In one of the greatest upsets of the 20th century, this Ivy League college won the 1934 Rose Bowl over Stanford University thanks to a trick play known as KF-79 by QB and eventual MVP Cliff Montgomery.

– The starting QB for the Buffalo Bills attended this Ivy League college.

– Jay Fiedler starred at QB for this Ivy League university.