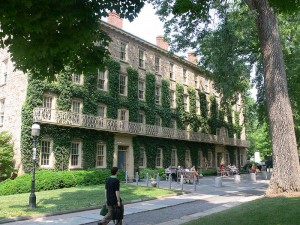 If you’re a prospective swimmer at Princeton, be sure to go through their meet results. Scan those heat sheets! See how your times stack up. Also, check out the school records to see where you stand. It’s one of the benefits of timed sports — athletes can know just where they stand (photo credit: Andreas Praefcke).

Want an Ivy League athletic recruiting tip? Do your research. What do we mean? Well, let’s say that you’re a rising high school senior who hopes to swim in college. Specifically, you’d like to attend Princeton. You’re a backstroker who goes a 1:02 in the 100 back and a 2:12 for the 200 back. Alright, so we’ve got some data points. Let’s start researching!

Alright, but that’s just the fastest times in Princeton women’s swimming history. For the really great information, it’s important to check out the schedule / results. Under the results, you can see how your times compare to other Princeton swimmers in actual meets. You should literally be going through the heat sheets! We dove through a few meet results and after reviewing seed times and results of Princeton women’s swimmers, a 1:02 isn’t that far off the pace. But it’s not good enough to warrant getting recruited.

In a few meets, Princeton’s slowest 100 backstroker went a 1:01. In the 200 back in the few heat sheets we scanned through, Princeton’s slowest female swam a 2:10…so you’re definitely not that far off the pace. Again, not good enough to get recruited but, if you improve your times a little, you might be able to hold your own on the team.