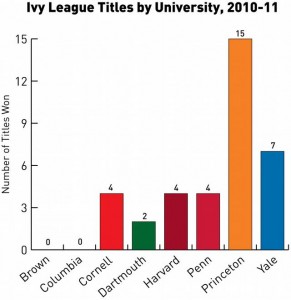 In this chart from the “Daily Princetonian,” it seems not all Ivy League athletic programs are created equal. Brown University and Columbia University have some catching up to do.

How do you think Brown’s athletic program compares to Princeton’s? How do the Big Green stack up against the Bulldogs? Well, if you’re judging these Ivy League athletes and programs based on how many Ivy League championships the universities earned in total this past academic year, then Princeton University is the runaway winner with fifteen Ivy League titles across both men’s and women’s varsity sports. In second place is Yale University with 7 titles followed by a three-way tie between Harvard, Cornell, and Penn with 4, Dartmouth with 2, and Brown and Columbia with 0. That’s right. Zero. From football to baseball to swimming to softball and crew, Brown and Columbia won a combined zero Ivy League championships this past year.

Check out our blog on Brown University Athletic Cuts and on Brown Athletic Recruitment difficulties to find out why Brown University might be behind the curve in Ivy League sports. What do you think Columbia and Brown can do to keep up with their Ivy League peers in athletics? Let us know your thoughts by posting below!