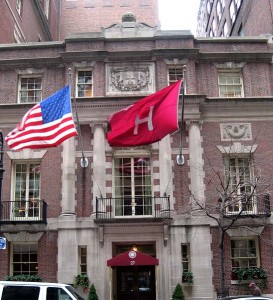 Here’s one of the Ivy League advantages: If you’re a Harvard grad, you can wine and dine friends at the Harvard Club.

Some may question if the Ivy League really does give students an advantage on the job market and in their career trajectories. We’ve shown you that the data that there are indeed Ivy League advantages in this area. If you don’t believe us, check out this post on Ivy League salaries or this one on another Ivy League advantage – secret societies. But, right now, let’s tell you about still one other benefit of attending an Ivy League institution.

Have you ever walked around Grand Central Station in Manhattan? If so, you may have walked by an old, historic building with the letters Y and C nicely intertwined. It’s the Yale Club, a place where Yale students, faculty, and alumni can go to play squash, work out, swim, have dinner or drinks, attend lectures, and even sleep over. The Yale Club is also home to students, faculty, and alumni of Dartmouth College and the University of Virginia. It’s an exclusive place that not just anyone can take advantage of!

And the Yale Club isn’t the only club like this. There’s also the Harvard Club on West 44th Street where you can stay overnight, host events, use the full service gym, reconnect with old college friends, work, eat, and drink. Maybe you’ve seen the inside on “Law & Order.” Fred Thompson’s character (the DA) often had after-work drinks on the show at the Harvard Club of New York City. Pretty cool, right?

The Yale and Harvard Clubs aren’t the only such exclusive university clubs that students and alumni can enjoy. Some other universities have them too. Princeton, for instance, has one on West 43rd Street. But does the University of Hawaii have a club should an alum visit New York City? No. It’s one of the definitive Ivy League advantages!