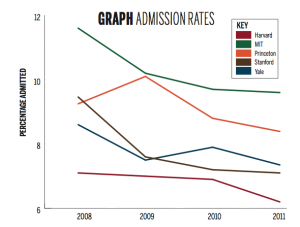 In this chart from today’s “Yale Daily News,” admission rates are seen dropping at Harvard, Yale, Stanford, MIT, and Princeton (among just about every other highly competitive university).

You may be reading how admission rates at many of the top colleges and universities, including Ivy League admissions rates, are down across the board this year. And it’s all absolutely true! The admission rates at these colleges are lower than ever before. But here’s a question for you: If the same student applied to many of these schools last year as well as this year (all things being equal), would that student have a tougher time gaining acceptance this year? One may think this is a dumb question. If the admission rate is lower this year, then obviously it would be more difficult this year for this student than it would have been last year. But that’s not particularly true.

The fact is that these colleges and universities are in such an arms race to increase their applicant pools that they recruit students who are absolutely unqualified for admission. Ivy League admissions offices are notorious for doing this! These students are recruited just to increase the college’s applicant pools, to boost their rankings in “US News & World Report.” As an example, if you are a general manager building a professional basketball team and you hold an open tryout to fill your last two roster spots, the people who can’t dribble or make a layup still factor into the odds of one making the team. These people who can neither dribble nor make a layup do not make the odds of making the roster more difficult for the talented player. They just add to the statistics.

A case in point is Columbia University which saw a 32% increase in its applicant pool this year. The admission rate at this Ivy League college may have dropped to 6.4%, an all-time low. But that’s only because the university was able to appeal to more applicants by becoming a member of the Common Application. In the end, the talented cellist with near perfect grades and SATs wouldn’t have found it any more difficult this year than he/she would have last year. And that’s all there is to it.