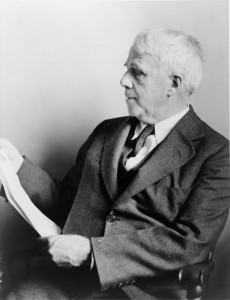 There’s a “CNN” article today that lists eight highly successful Harvard dropouts – no, not Mark Zuckerberg or Bill Gates. We suppose the founders of Facebook and Microsoft have become too ubiquitous with the term Harvard dropout that “CNN” wanted to explore some less well known ones. So who tops the list?

The dropout who tops the list also happened to have dropped out of another Ivy League college – Dartmouth College – and his name is Robert Frost. Dartmouth College certainly maintained closer ties to Frost than Harvard throughout the course of his life and they are proud to honor his legacy with a bronzed statue by the Bema. In addition to Frost, Harvard dropouts include…

Actor Matt Damon. According to the “CNN” article, “It’s fitting, then, that Damon’s big break was ‘Good Will Hunting,’ the 1997 film he co-authored and starred in with his friend Ben Affleck. In one scene, Damon’s character tells a Harvard student, ‘You drop $150,000 on an education that you could have gotten for $1.50 on late charges at the public library.’ Damon appeared on ‘Ellen’ earlier this month and said he doesn’t have any plans to go back and finish his degree. ‘I feel like I got everything I needed to get from that experience,’ he said.”

Newspaper tycoon William Randolph Hearst. He was actually the first business manager of the  “Harvard Lampoon,” the same paper Conan O’Brien would one day write for.

Actress Elizabeth Shue. After starting out at Wellesley College, Shue dropped out of Harvard to pursue acting. But unlike Matt Damon, Mark Zuckerberg, Robert Frost, Bill Gates, and the rest of the crew, Shue eventually returned to Harvard (in 2000) to complete her degree in government.

Other well known Harvard dropouts include but are not limited to: Edwin H. Land, James B. Connolly, Pete Seeger, R. Buckminster Fuller, and Bonnie Raitt.

Check out the “CNN” article here.

And check out our related blogs on Ivy League rejects: Ivy League Rejection and There is life after being rejected.