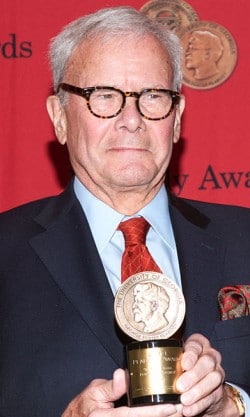 Tom Brokaw was rejected by Harvard University when he applied for admission out of high school (photo credit: Peabody Awards).

There’s an article in “The Harvard Crimson” by Y. Kit Wu about a couple of quite successful Harvard rejects. We’ve written in the past about a couple of well known Harvard rejects (as well as about others rejected by highly selective colleges). But we’ve got a couple of names to add to the list, as reported in this piece in Harvard’s newspaper. Tom Brokaw, the longtime anchor of “NBC Nightly News” and for so many years the face of “NBC News” was apparently rejected by the Harvard admissions office.

As reported by Wu, “At a lunch for the movie Spotlight, Brokaw poked a bit of fun at himself, saying that if he had gone to Harvard, he would have been infinitely more successful. He then went on to say how he was only at the lunch– which was held at a Harvard Club– because he moderated the panel of Spotlight actors and director at the lunch. It’s okay, Tom, you don’t need an excuse to sit with us.”

The piece also brings to light that Warren Buffett, perhaps the world’s greatest investor, was also rebuffed by Harvard University. But he turned out alright too, amazing over 66 billion dollars and all and becoming one of the world’s leading philanthropists. So, as it turns out, you don’t have to get into Harvard to be successful. It just sure doesn’t hurt either. Maybe Brokaw and Buffett harnessed their Harvard rejections as motivation. We don’t doubt it.